I've been considering how to write this article and have felt that the traditional match report approach is both something I would not be very good at nor would it be interesting. Instead, I will focus on the whole match day experience offered by the good people of Auchinleck Talbot Football Club.
I have a liking for junior football in Scotland. "Junior" refers to the level of the game rather than the ages of the players.  It can be best described as semi-professional. At the top end, there are some very well supported clubs who can give their senior colleagues tough games. In contrast, the lower end sees small outfits with often 2 or 3 dozen spectators on a good day. They all share certain things in common however in my view. One of these is they are run by dedicated committees and volunteers. The teams are based in towns and villages throughout the country with the league system divided into West, East and North regions. In the West, a number of clubs are found in the old industry heartlands of Ayrshire. On the drive to one such example, Auchinleck, we passed through Mauchline and saw signs for numerous others, Cumnock and Hurlford amongst them.
Queen's Park weren't playing (thank goodness, I couldn't take much more of season 2013/14) and I had no race so, with training over with in the morning, my Dad, brother and I set off to take in one of the humdingers of the junior game, Auchinleck Talbot v Cumnock Juniors. I have been to junior matches at East Kilbride, Pollok, Arthurlie, Cambuslang and Rutherglen but this represented a step up in the lunacy scale on a par with maybe commencing a PHD immediately after completing your Highers at school. Some Kilmarnock based acquaintances (thank you Scott and Kara) pointed us and our bullet proof vests (an essential item of equipment apparently on derby day in Auchinleck) towards The Railway Inn for a pre-match beer. On finding Beechwood Park, home of "The Bot," however, it became apparent a social club existed. We sheepishly approached the entrance to be greeted by an old punter in a chair saying "in yese comes boys, one of the members will sign yese in." Thereafter, with a pint of McEwans 60 Shilling in hand and the ground entrance all of 20m away on foot, I savoured the flavour of my drink and surroundings. The club comprised two bars with all manner of memorabilia. It was awash with people in Auchinleck colours. We clearly stood out as one elderly man, clearly a regular, questioned where we were from and why we were there. Our reply was favourable to his ears and I think we made a friend out of him. I was sorely tempted to ask my Dad to drive back and squeeze in another beer before kick off but opted to save it for a return visit. Yes, I liked the social club.
With a population of around 3,500, the ground is big enough to hold the entire village and, on this day, it looked like it did. A hardy band had braved the 2 mile trip from the enemy territory of Cumnock and were segregated from the hundreds of home fans and at least 3 neutrals. An Auchinleck win would see them crowned West of Scotland Junior League Premier Division champions. The junior equivalent of Celtic beating Rangers to win the league or vice versa. Pie and bovril in hand, I took in the first half from the packed covered standing area running along the pitch behind the dugouts. The home team seemed edgy and Cumnock had the better of the game. Very few chances were created though and, by half time, it was clear the game needed a goal. The shooting from both teams was pretty out of range. The natives were restless. I did though get a clear sense of the rivalry the teams shared. It had been a tense atmosphere during the first 45 minutes with tempers ready to overflow. 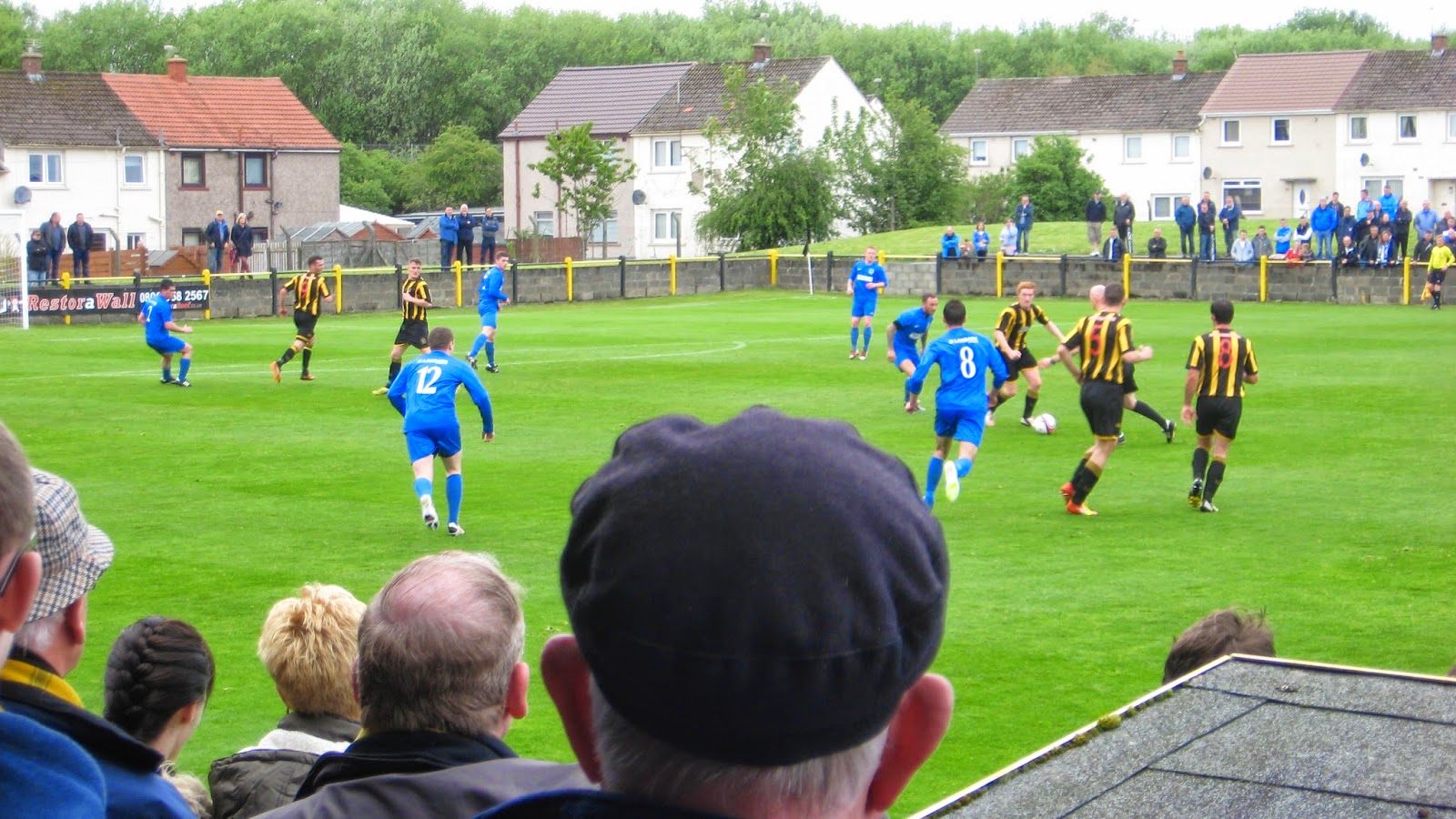 Above: first half action, Auchinleck in black and gold and Cumnock in blue. The sparce area is the away support.
Into the second half and things did become more bad tempered. I didn't envy the referee's job. The first goal, when it came, was for Cumnock in around 55 minutes. A rather scrambled effort inside the penalty area to the delight of the far travelled (!) away contingent behind the goal. This did wake Auchinleck up a bit and, around 10 minutes later, they pulled it back to 1-1 with a deflected shot from just outside the area. The enclosure we stood in erupted and I got shoulder barged by one guy clearly pleased with what he'd seen.
Less than 5 minutes later and a second yellow card for a Cumnock player saw them down to 10 men and the blue touch paper truly lit. It took some time to calm the players down and restart the game. Concerted pressure from the Bot forced a handball in the box and saw a penalty awarded. Auchinleck duly scored to go 2-1 ahead, the scorer was booked for removing his strip and to cap it all, another Cumnock man took aim at one of his opponents with the ball and missed, sending it into the enclosure of home fans behind that goal. Cue a torrent of abuse and flaring tempers on and off the park and a yellow card for the offender. I've always read and heard about these sort of games and, after a patient wait, was now in the thick of one. The atmosphere was frenzied.


With the extra man advantage, the Bot took control and were in little danger of losing. To cap everything, I earned a front row seat to a fight on the touchline. It transpires that the Auchinleck assistant manager and Cumnock manager are twin brothers. Think Grant and Phil Mitchell from Eastenders and you get the picture. I could barely believe my eyes as they approached each other, argued then raised their fists. Did I say I did not envy the referee?
There were no more goals and Auchinleck duly sealed their title win. Grant and Phil shared the coldest of handshakes.  For a £5 entry fee each, my Dad, brother and I had seen some unbelievable entertainment. Between league games and cup ties, these 2 sides play/fight each other several times per season. If you have a free day and find Auchinleck Talbot and Cumnock are paired together for a fixture, give yourself an experience. Get along and see it. 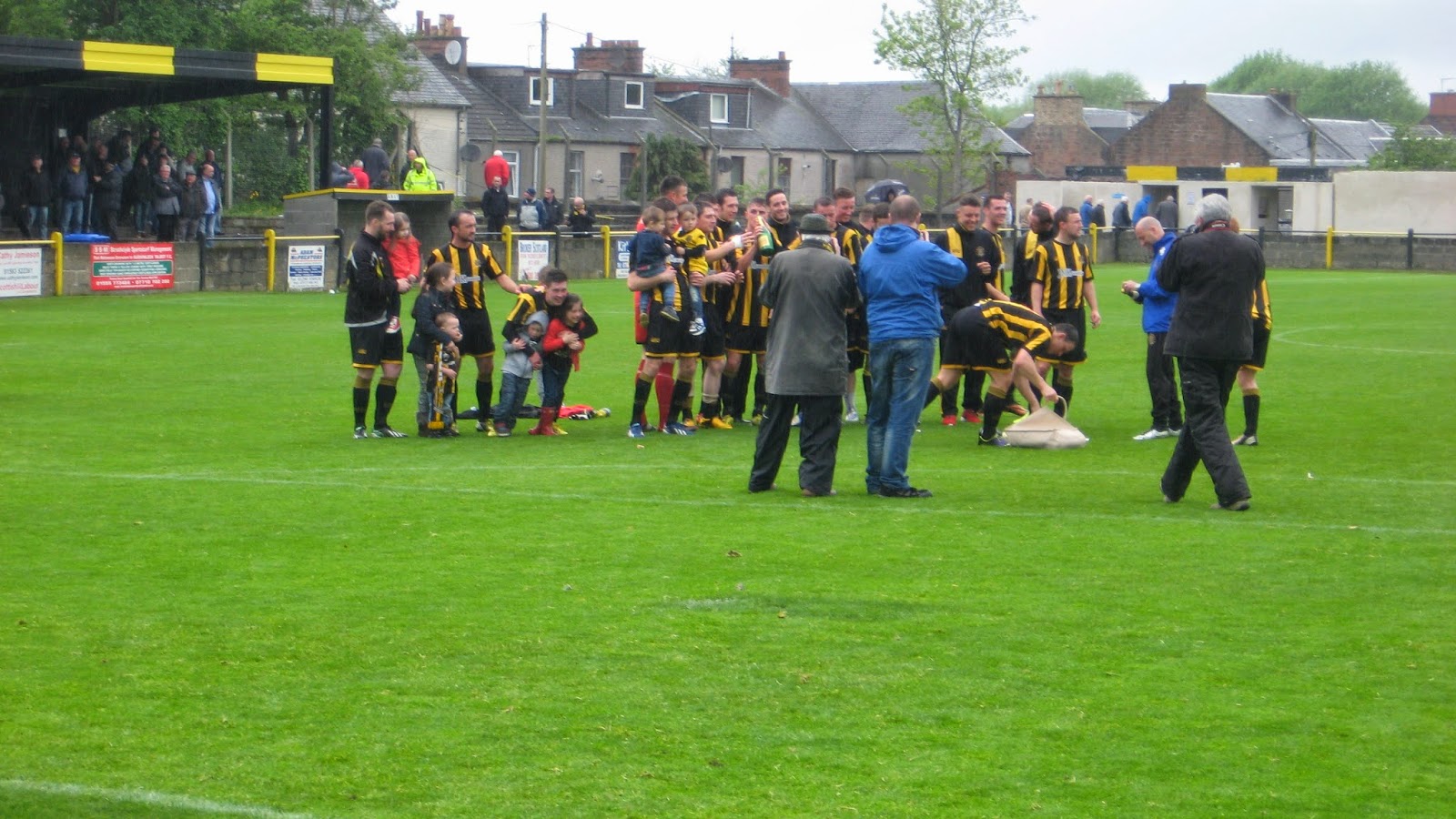 Above: Auchinleck celebrate winning the title.
Posted by athlete_sg at 00:57