Something Worth Seeking Out

Before continuing with my "Life Before Lockdown" series of articles, I shall have a brief pause to bring attention to a commendable venture of a friend pursued for a very worthy cause.

I became acquainted with Scott Martin of Kilmarnock Harriers a number of years ago. As far as I recall, we first encountered each other at the 2007 Isle of Arran Half Marathon, a significant race for me being my first ever road race victory. As time went on, as you do in the running world, we would meet at races and have a blether and, when Facebook became a thing, connected on there. We have also socialised on occasion outwith our sport. As well as running, we have a shared interest in following our respective football teams and, from what I have gathered, he, like me, enjoys a beer, at the correct times of course. Back in January 2020, I appreciated the pre-match pints he purchased for my Dad and I at Rugby Park though not so much the 6-0 drubbing his team inflicted on mine in the Scottish Cup tie that followed. I have forgiven him since.

During the first lockdown I became aware that Scott had a little writing project in progress. The result was a book, the cover of which is photographed below. 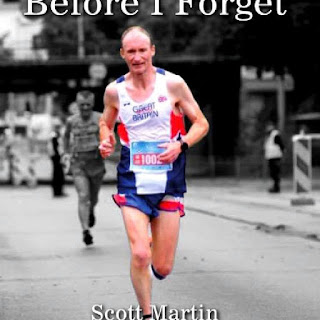 The publication of Scott's work has had the very positive spin off of raising money for Alzheimer Scotland. This is a cause very close to Scott's heart since his mother has lived with dementia for a number of years. The topic and its effect on the lives of mother and son are addressed throughout the book in a very thought provoking and touching manner.
The remainder of the book can be summed up as memoirs of an extremely varied and successful running career with many an amusing anecdote which I was able to relate to. It was the marathon that brought Scott into the sport and his improvement over the years has to be seen to be believed. It is apparent how much time and effort Scott has put into getting the very best out of himself, all the while looking after his mother and dealing with the other challenges life can throw at us in the background. I have made no secret of my aversion to the marathon so it is saying something that Scott's book put me in the mood to try one again. Only momentarily of course. The insights into his preparations and how he ran the races themselves gave me food for thought as to how I could do things differently whenever I get round to tackling the distance again.
I don't wish to divulge too much of the detail that the book contains because I think that it's best that people read it for themselves. Remember you will be contributing to an excellent cause in making the purchase. Scott can be contacted through Facebook. Alternatively, email me at the email address at the top of this blog with any requests and I will either liaise with Scott or put you in touch with him directly.
Happy reading and, if sufficiently inspired, happy running.