Driving to and from work. Doing a day's work in the office. Getting the train to work while relaxing with a book, picking up a cup of tea from Greggs on the way in and running home. Training with my club. Racing. Venturing to a Parkrun and socialising afterwards. Going to the football with my Dad. Going for a pint with my brother. Going out for a meal with my family. Having the occasional Sunday run "away day" down the Ayrshire coast. What have all of these activities got in common? They have all been off limits to me since 23rd March 2020. 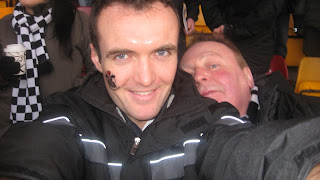 Above: the football with my Dad in happier times.

None of us need any introduction to the perils of Covid 19 and the destruction it has caused to our daily lives. Offices, shops, pubs, restaurants, cafes, sports facilities, hairdressers/barber shops and schools all closed. Friends and family separated from each other. Thousands of people losing their jobs and even their lives. It has been nothing short of a catastrophe. Lockdown has had an effect on me too in many ways. I thought that sharing my experiences might help others.

From the outset, I would say that I know that I am far more fortunate than many. My heart goes out to everyone who has suffered in any way during this. The first impact on me was the cancellation of a holiday. On 14th March, I was scheduled to fly out to Portugal's Algarve region for 6 days to enjoy some warm weather training for the third consecutive year. While Covid 19 had not spread throughout the UK and there were no travel restrictions at that time, Portugal was in a state of alert. Concerned about bringing the virus home with me (especially with my Mum having just recovered from a life threatening illness) and having to "self isolate," I cancelled the trip and decided to have a week off at home instead. I got more than I bargained for. 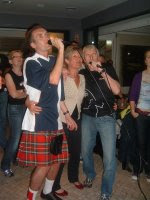 Above: a previous trip to the Algarve in 2009, once the training had been done of course.

You could sense things were happening. My time off was cut short at 3 days to prepare for homeworking. Lockdown started on 23rd March. My old room at my parents' house became my new office. It certainly had its perks. A much shorter, traffic free commute (less than 2 minutes), no need for formal dress, no face to face client meetings. It also gave me the chance to tune into the Ken Bruce show on Radio 2 every morning. I have been a fan of Ken for at least 16 years since seeing him as a guest in Dictionary Corner on Countdown. I used to listen to the late Terry Wogan on the radio and soon realised that Ken was on after him. When I was in Sweden for 6 months in 2004 my Dad used to send me recordings of his show on cassettes. Ken has proven to be a tonic during homeworking. Great music and chat and a wee quiz called Popmaster every day at 10.30am. I strongly recommend it.

Over time however, things started to fray at the edges. Realising that we were in this for the long haul, my morale, motivation and mental health slipped. I received a pay cut and reduction to a 4 day week. There is only so much you can achieve outside the office and the frustration at the length of time even routine tasks took grew. I found myself making occasional twilight visits to the office (with no-one else there) to complete some tasks. It wasn't uncommon for me to be there at 8pm or later.

Eventually, at the beginning of June, I agreed to go on furlough for 3 weeks. To be taken out of the firing line for a while was welcome but it's not really a holiday when leisure options are so limited. The first couple of weeks were fine but by the third week I was thoroughly fed up and, yes, a little depressed. Relief came when I was told that I could not only return to work on 1st July (still on a 4 day week) but also be in the office if I wished provided that I kept my workspace sanitised. At the time of writing, I have been back for 3 days. The sense of normality it has brought is a godsend.

More generally, the whole situation has been a massive test of my mental health. I have addressed this topic elsewhere on this blog. I'm quite a private person but the loss of the opportunity to socialise with others when I feel like it has been a massive loss. I'm still training on Saturday mornings but wouldn't it be nice to get to a Parkrun one week? I love a good brunch after training but occasionally enjoying it in a cafe with others would be lovely. Saturday afternoons in the house listening to Off The Ball and Sportsound on Radio Scotland have become the norm. While not the worst way to pass an afternoon, it's no substitute for being at a race or going to see my team. A drink at home or at my parents' is good once in a while but it's nice to break it up with an evening at one of my locals in East Kilbride once in a while. A "virtual" race just does not have the same buzz or social aspect as the real thing. I guess what I'm trying to say is that lockdown has been horrible. I stay alone and have had a few periods of depression and loneliness. This has caused the very real worry of slipping back to the state I was in back in 2018. Friends, clubmates and work colleagues, you name it, I miss you all more than I can put into words. 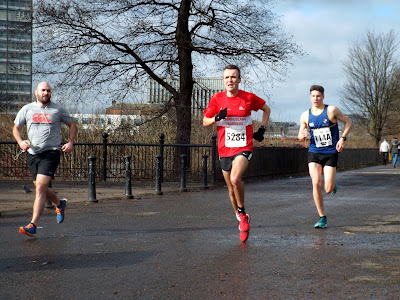 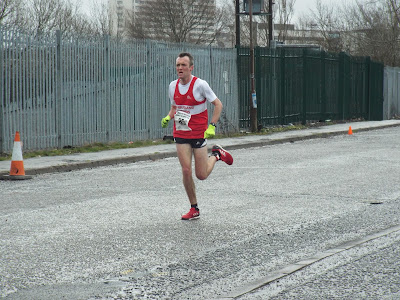 Above: the Allan Scally Road Relay on 29th February and the Cambuslang Harriers 10km Road Race the following day, the last two occasions I did a real life race to date. Photos courtesy of Kenny Phillips.

As I write this, the virus seems to be getting suppressed, at least in Scotland, and restrictions are being eased. I'm mentally drained from hearing phrases like "social distancing" and "new normal." With regard to the latter, in no way do I wish the way that we are currently living to become normal. I don't want to resemble a bank robber when I go to the shops or get on a bus or train. When I meet someone I want to greet them with a hug or handshake. I have no desire to watch sport played out without spectators. I wish to see people physically in person, not on a screen. I certainly would be grateful to see more tolerance and respect in society than there was previously. Otherwise, Covid 19, please give us our lives back.

I have grown to love a beautiful song by The Adventures called Broken Land. I became aware of it when Ken Bruce played it one day. It contains a line which beautifully sums up my feelings about this year's events- "where I stand, I see a broken land." I hope and pray every day that it is fixed sometime soon.
Posted by athlete_sg at 22:37