"Depression is a very bad thing. It's like a virus. If you don't stamp on it, it spreads throughout the mind, and then one day you wake up in the morning and you....you can't face life anymore!"

Eagle eyed readers will recognise these words from the critically acclaimed BBC sitcom, Fawlty Towers. They were expressed by the hapless hotel manager Basil Fawlty towards an equally unfortunate individual, Manuel the Spanish waiter. Eavesdropping on the exchange, Basil's "little nest of vipers" Sybil delivered the punchline, "then you open a hotel."

While stated in a comical context, reading these words in isolation makes you realise that they convey a very serious message. Depression is indeed a very bad thing. Just ask me.

After a period of fairly regular activity, updates to this blog have dried up completely in recent times. There is a major reason for this and it has taken me until now to find sufficient courage to share my story.

I may as well just come out with it. In a nutshell, throughout 2018, I suffered with depression and anxiety. It just happened. A number of things contributed. Family matters, my lifelong friend moved away after living on the same street as me all of our lives, a couple of other friendly neighbours placed their properties up for sale, I was struggling badly at work. Everything just accumulated to the extent that, by January, I found myself in a deep, black hole. I also had next to nothing going on from a social point of view.

I've always been a worrier by nature and endured some low moods. I get stressed about all sorts of things. However, this was seriously bad. Try to imagine, if you can, the feeling of getting up for work on a cold, dark Monday morning in the winter. I felt like that every day of the week. If I was not in employment I may not have got out of bed in the morning. It's a miracle that I managed to hold down my job. I never sought medical help but was on the cusp of it. My local health centre has an online facility where you can describe your symptoms and submit them for a GP to consider. It's designed to free up appointment space so you can receive a prescription without needing a face to face meeting. However, the most serious cases still get seen in person. There is no doubt that I would have fallen into this category. I completed the form more than once but every time I came to the final submission page I bottled out of it.

I continued to run though my training regime and form dipped badly. I missed the odd run and session. It's a negative cycle. When you feel terrible, you don't want to train. When you don't train, you lose fitness, your race performances slump and your bad moods worsen. I went through this cycle a number of times. My 2018 training diary makes for grim reading in places. 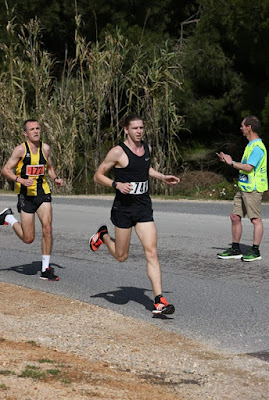 Above: a 5km road race in Portugal in March 2018 during the height of my troubles. The pain on my face isn't solely due to the race.

I started to develop problems in other areas of my life. My diet suffered. My usually careful dietary habits gave way to comfort eating- fizzy drinks instead of healthy ones, having sweets or chocolate bars with my lunch at work. I have always strictly enjoyed a drink socially and at the right times but, during this period, alcohol had a detrimental effect, simply making me more depressed.

Things came to a head in May 2018. During a work night out in Paisley early that month, I simply drank too much. I missed the last train, somehow managed to get a taxi home, not even remembering what time I got in. I had a horrible hangover the next day and could only manage a 3 mile jog. I was self destructing.

The following week, at the start of Mental Health Awareness Week, I finally made my situation known publicly. I just couldn't take any more. I ran the Monklands Half Marathon. The race also took place on the second anniversary of losing my Gran so I was in a heightened state of emotion. Barring a disaster, I had the race won by 10 miles and spent the last 3 planning in my head what to say. The outpouring of support received was overwhelming and had an instant effect. My problems still existed but, for the first time, I felt that there were people out there who cared about me. The two tonne weight on my shoulders eased a little.

That said, things got worse before they got better. At the end of May, I travelled to Watford for a 5000m at the British Milers Club meeting. I was in the A race, something the old me would have relished. Not this version of myself. I was like Superman laced with Kryptonite. 6 laps into the race, well off the pace, struggling and feeling drastic, I stepped to the right and off the track. I felt lonely and humiliated. This was rock bottom for me, as bad as it got. My Dad just wanted to see me home the next day.

While progress has never been a straight line, that weekend signalled a turning point. The Monday (the race was on a Saturday) was a Bank Holiday. I got back to basics and spent the day down the Ayrshire coast with my parents, enjoying a 15 mile run in glorious sunshine. 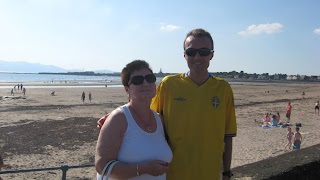 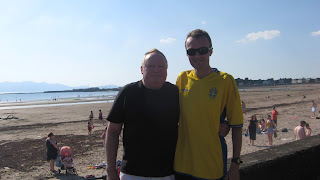 Thanks to the support of my family, some very good friends and one or two other people who, through the whole experience, have become close friends and confidantes, the remainder of 2018, though with a few troughs along the way, constituted a general upward curve. Through all the turmoil, I had somehow managed to purchase my first flat. Having got the keys in March however, I seriously underestimated the vagaries of homeownership and wasn't in a position to move in until mid August. In July I enjoyed a dream holiday in Scandinavia I will never forget. It is a worthy subject of another blog post. It looks like this blog is going to be resurrected again! Most significantly, my running took a turn for the better. In late July, I clocked 15:06 (fastest time of the year up to that point) for a 5000m in Glasgow before putting Watford to bed at a BMC meeting in Stretford in August, bring my time down to 14:55. The state of my mental health is closely linked to my running so you can imagine how I was feeling now. 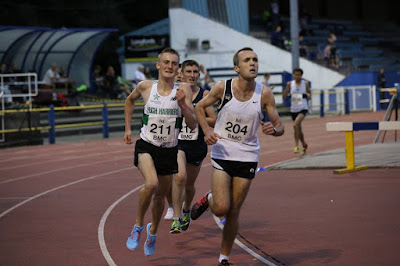 The recovery continued for the remainder of the year, with considerable help from good people as stated, and by Christmas I was as close to my old self as I had been all year. I still had my bad days but they were considerably fewer and never as awful. I had also got my training together, even resuming my regular attendance at my club's Monday track sessions in November. A strong showing at the undulating Ribble Valley 10km Road Race in Clitheroe (31:16, fastest 10km of the year), between Christmas and New Year was a real signal to myself that my training was getting there and I was back. 2019 has been a year of positivity which deserves to be the subject of a separate post (see, the blog is definitely resurrected). One thing I would mention is winning my first ever Scottish individual title in January, a Scottish M35 3000m gold indoors. I was one emotional and proud runner that night.

I could say more but I think I've probably said as much as I need to in order to give everyone an insight. We all have mental health. It can happen to anyone. From the outside, I had a career, a loving family, decent social life, some talent at my sport, other interests. Yet, it happened to me. I am so pleased that the stigma has been removed and more people are finding the courage to open up. The work of organisations such as the Scottish Association for Mental Health and Back Onside is to be commended. I have definitely become a better and stronger person for what I have been through. A lot of lessons have also been learned. I am very strict now about being kind to myself- maintaining regular working hours, treating myself (you can't beat a good cup of tea), making time for things I enjoy (I've found that I love Parkrun catch ups with folk over a post run tea or coffee). The little things matter. I also have coping mechanisms for when things feel tough. To everyone who helped me in any shape or form and continues to do so, you have my heartfelt thanks.

It has been a worthwhile experience writing this article and I only hope someone reading it can take some strength and inspiration from it. Remember you are never alone. No-one with any shred of decency will judge you negatively. Speak to people, seek the help you need. I just needed family and friends to talk to but I found them. Above all, stick at it and never give up. Perseverance creates a strength to withstand anything life throws your way. The only time to really worry is if you find yourself opening a hotel....