Though I had entered this race in advance, I remained in two minds whether to keep training instead until learning that my brother had got my Dad a ticket for the Celtic-Malmo game at Celtic Park on the same night. I considered that I could take my Mum for a trip down the Ayrshire coast which would also allow me to race. Agreement was duly reached with all concerned. Since I hadn't been to this race since 2010 nor competed in Irvine since the 2012 West District Cross Country and had developed an uncanny knack of getting lost in the town up to and including my last visit, I felt a pre-race recce would be prudent. I therefore drove down after work 24 hours in advance on a beautiful evening for an easy 7 mile run. I got all the navigation gremlins out the way (one wrong turning and several laps in the car of the retail park), memorised my directions and had a relaxed plod (average 6:29/mile pace) in the late summer sunshine.
The following night, everything pre-race went to plan apart from the weather. While not cold or particularly windy, unfortunately, we encountered torrential rain. I warmed up under a railway bridge to keep dry then, after making sure my Mum was okay (she made a shopping trip to the nearby Asda during the race), I joined over 200 others on the start line outside Irvine Victoria Juniors' football ground. In Chris Upson and recent new recruits Simon Gold, David Stirling and John McCluskey, I had company from Cambuslang. Neil Renault, winner of Irvine's 5 mile race in July, had also travelled through from Edinburgh, protesting that it had been beautiful when he began his journey. The vagaries of the Scottish climate.

As we set off through the second exit of a roundabout then up a gradual incline past the train station, Neil immediately took the bull by the horns. I attempted to follow him but by 1km it was clear he was taking no prisoners and, by the time we joined the cycle path which formed much of the route, I found myself gradually becoming cut off. I resigned myself to a long, hard effort, all the while focussing on sustaining my own pace in the hope Neil's would drop off. I went through 5km in 16:20. Not great but better than Dundonald. By the turn between 5km and 6km, I got a glimpse of Neil. He was tucked in behind the lead bike and moving well.

Nevertheless, I stuck to my task. At one point, I lost sight of Neil, had no-one behind me and no other car on the road so went through a strange experience of running as hard as I could along an empty road in pouring rain completely by myself. The isolation ended as I approached the Magnum Centre at the Harbourside with 2km to go and got some encouragement from my Mum. Even though 2nd place was secure, I tried not to slacken off and maintained the effort to the finish line which I reached in 32:30. A good improvement on 2 weeks earlier. I had therefore run the next 5km slightly quicker, in 16:10. 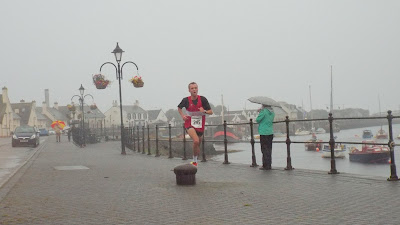 Above: approaching the finish on the Harbourside. Photo courtesy of Kenny Phillips.
Neil totally destroyed my time, running 30:45. Clearly he's in serious training for something. Probably an autumn marathon? Del Young (Garscube) completed the top 3 with a similar solo effort to me of 33:57. In the ladies race, Dundonald winner Laura Wallace picked up another win with 39:27, narrowly ahead of Laura Devine (Garscube, 39:24) with Charlene Kelly (Dumbarton) 3rd in 40:34. In the Cambuslang stakes, Chris claimed first over 50 with 36:16, Simon earned a new personal best of 39:16 and David and John were happy with their shifts in less than ideal weather, 47:19 and 52:09 respectively.
It unfortunately wasn't a night to wait around and, being drenched and also mindful that wet conditions can aggravate my Mum's arthritis, got back to East Kilbride where we treated ourselves to a Chinese takeaway.﻿


Looking at my training diary while writing this report, I noted that I went into the race off the back of 46 miles of running in the previous 4 days. I'm looking longer term to the Copenhagen Half Marathon on 13th September then the 2015/16 road and cross country season and hopefully the spadework I'm putting in now will bear fruit later.

Finally, as hinted at, this is one of two races organised by Irvine AC. The other is a 5 miler in mid July run over a similar course though with a different start and finish. I thoroughly recommend both.
Posted by athlete_sg at 22:25