Being thrown a trip to Inverness for match 2 of this year's Mens League presented a number of logistical challenges. Assembling a team of athletes and officials willing to attend. Arranging overnight accommodation (no way on God's green earth was I negotiating the A9 at 7am on a Sunday morning). Finding the venue given that I had never competed in Inverness before. Having conquered all the foregoing, getting back down the road in one piece. Thankfully everything came together and it turned out to be one of my most enjoyable experiences in the sport for several years.
I got together a squad of 10 comprising 7 of us competing and the required 3 officials. 3 of the athletes (me, Craig Whyteside and Alistair Stewart) and 2 of the officials (Susan Gatens and Willie Sutherland) left from East Kilbride early on Saturday evening for the approximate 170 mile drive north. 2 athletes (Iain and Craig McEwan) were already there, 1 athlete (Kyle Jackson) and 1 official (Mark Stringer) would arrive later and the remaining athlete (former American footballer turned thrower Ian Smith) was arriving himself on Sunday. I managed to get 4 rooms at the Craigmonie Hotel at a very reasonable rate. Having driven all the way, with a very pleasant stop at Ballinluig Services for dinner (gammon steak, fried egg and chips), I felt in need of a drink so joined Susan and Willie for a couple of refreshments in the hotel bar. 2 bottles of WilderNess from the Loch Ness Brewery went down very well.
A slightly restless but otherwise good sleep and full Scottish breakfast later, we made the short journey to the Queens Park stadium. This was easily going to be the most rural venue I'd ever raced at. The sun was shining and the track, apart from a missing apostrophe, shared its name with my football team. The omens were good. 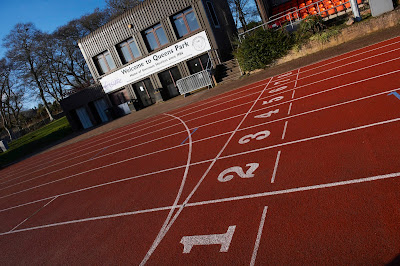 Above: an image of the track. Photo courtesy of Inverness Leisure.
I prescribed myself the same middle and long distance treble as the first match. I firstly took the 800m B race, surprisingly taking the bell in 62 seconds in the lead. Unsurprisingly, in contrast, I got passed on the back straight second time around but somehow produced a 61 second lap to take 2nd place in 2:03.83. After a debriefing and general chatter with a new chum I made in Armagh, Inverness girl Jenny Bannerman, I changed my numbers and spikes and prepared for the 3000m steeplechase. The standard was higher than it's been at Mens Leagues for a while and I found myself a fair bit down the field. Encouragingly I gained in strength and confidence, slowing picking people off to finish 4th overall in a new personal best of 9:46.79. Michael Houston of Inverclyde pipped me on the line, nudging me into 2nd place amongst the Division 2 finishers.
After a little time (an hour and a half) to regroup, eat and change into dry socks and spikes I took my place for the 5000m. I basically gritted my teeth and got through this with another overall 4th place but this time 1st Division 2 athlete. I was delighted to clock 15:13.38, again making me wonder why I got my preparation spectacularly wrong in May at the Scottish 5km Road Race. Jenny, spectating with friends and family, questioned my sanity. I replied that I may as well make the long journey worthwhile.
More in hope than expectation, I said to the other 3 4x400m relay participants there was no pressure to run it. Sadly (for me because I comprised the other team member) they were keen to go. I started off, basically since I was the slowest on paper and I surmised it would be damage limitation to get my lame effort out the way early. I somehow produced a sub 60 second clocking and we came in 4th out of the 5 teams who started.
A gallant effort from the whole squad saw us claim 4th (it seems to be a theme here), edged out of 3rd by only 8 points. The top 5 in the 9 team Division 2 look like this:-
1. Arbroath 17
2. Inverclyde 14
3. Lasswade 13 (429 match points)...
4. Whitemoss 13 (423 match points)
5. Pitreavie 12

All to play for with 2 matches left.
A drive back down the A9, with another dinner stop at Ballinluig (a good old mixed grill for me) rounded off a fantastic weekend. The next time a chance arises to compete in the Highland capital, you bet I'll be there.﻿
Posted by athlete_sg at 00:32