It had been much longer ago than I first thought, 3 years, since I last raced Cambuslang's annual 10k road race. I won on that occasion setting the still standing course record of 31:18 on my way to my second consecutive and, to date, last club championship. In 2013, I opted to assist with stewarding and last year I was in a poor place with a months long post marathon hangover having given me a DNF at the National. Basically I went into hibernation for a while.

While buoyed by the Armagh experience, the wind and cold rain on this race day was doing nothing for my enthusiasm as I turned up at the club for my number. It was a day to wrap up so a polo neck, hat and gloves were the garments of choice. With the out and back course and a driving wind, I knew it would be pot luck whether the elements would favour us or not.

From the off, I was quickly joined by Robert Gilroy and Max McNeil, 2 guys whose scalps I had hardly taken for months. As well as I had run in Armagh and other races so far this year, I still felt on a bit of a tight rope, being one disappointing result away from the return of the self doubt that can plague my running at times. Robert and Max had run the National 6 days before, a gruelling 12km slog through thick mud in poor weather. I hadn't. In a split second during the first 200m, I decided to put the boot in and see what happened. I opened up a gap very quickly on the rest of the field. Only another 9.5km or so to hold on.

Exercising my golden rule of racing of not looking behind, I did not know how much of a lead I had. Heading onto the Clyde Walkway, where the river level was huge with the rain, I adopted the tactic of running on the assumption someone was on my shoulder. At halfway, I was on schedule to better my course record and at the turn at 6km, I saw my gap on 2nd placed Robert. Healthy but not healthy enough so I kept pushing. I now faced the teeth of a gale so focussed more on winning the race than the record, kept going by a few shouts of encouragement from runners still on the outward journey. As long as I ran no slower than the chasing pack, I would be okay. 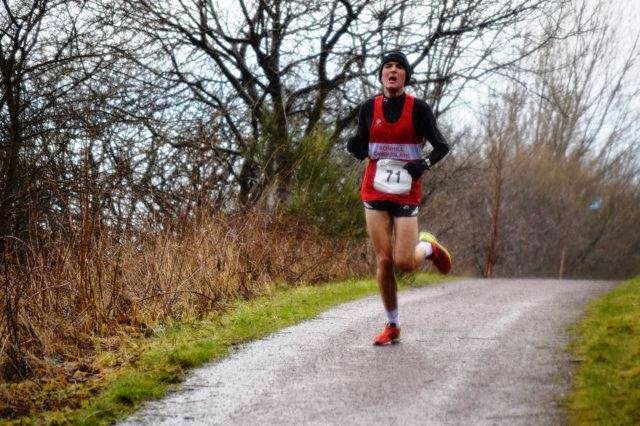 Above: approaching the final kilometre, battling the elements as much as I battled the rest of the field. Photo courtesy of Colin Stephen.
﻿
Coming off the walkway in the final kilometre, I got some respite from the wind and enjoyed a smoother path into the finish, 5km splits of 15:27-16:04 giving me a finishing time of 31:31. I nearly gave club President David Cooney a black eye with my fist in the air. Maybe a slight overreaction to the race win but it's testament to how well Robert and Max have been running that I saw taking their scalps as a huge monkey off my back. Ben Stevenson, part of a visiting Edinburgh University contingent, actually overhauled both to take 2nd place in 32:16 with Robert 3rd 2 seconds later and Max 4th in 32:48.

Back at the prize giving, the club were presenting new shields to the male and female winners in memory of club member Jimmy Sands who passed away last year. In a very thoughtful touch from our committee, Gordon Robertson, President of one of Jimmy's other clubs Red Star AC, was invited to present the awards. 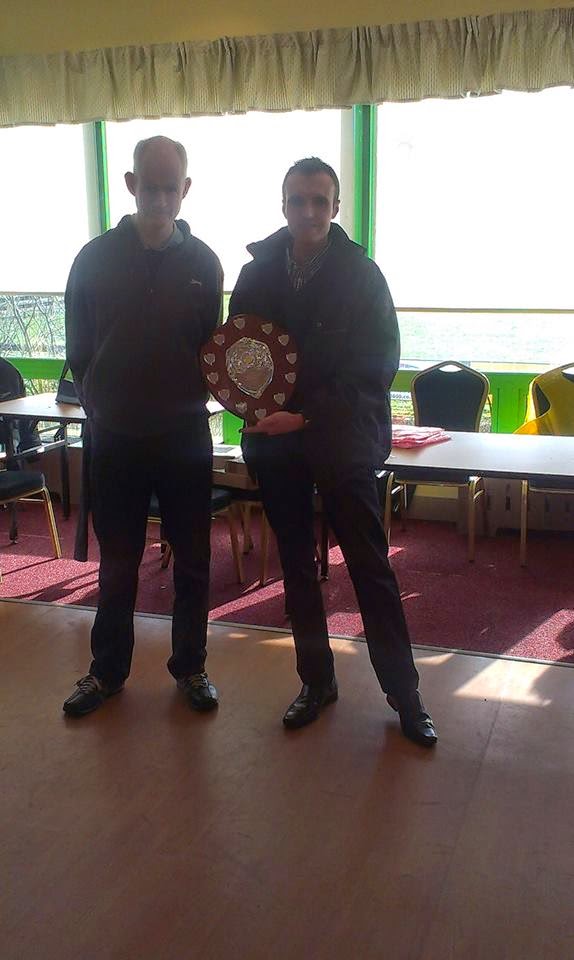 
We also claimed the team prize, myself, Robert and Iain Reid being the counters, earning ourselves a new club training top each. Complimentary pies, bridies and hot drinks rounded off a satisfying late morning/early afternoon's work. I then looked towards a trip to Birmingham 6 days down the line.
Posted by athlete_sg at 00:18