I didn't ease off for the race, doing 2 runs totalling 15 miles on Saturday, 7 miles on Sunday, 7.5 miles worth of efforts on the road on Bank Holiday Monday and a 7.5 mile run home from work on Tuesday. This plus wearing new racing shoes and very windy conditions meant I remained realistic about what to expect. I managed to spend the afternoon in our East Kilbride office to prevent any hold ups in Burnside. My Dad came to direct me. My Mum came for the hurl in my new car.

Cambuslang were 5 handed with myself, Robert Gilroy, Stephen Paris, Dave Thom and Robert Rossborough. If only there had been a team prize. Sadly not.
It was one of those nights when you just wanted to get on with it. Eventually we did and a large group took on the first kilometre along the coast into the wind and sand blast. I was happy to try and hide behind others. Robert Gilroy was among those who took the early pace. Michael Deason (Shettleston) was in the field. I couldn't see him but sometimes you don't need to see someone to know they are there. Turning inland towards the 2km mark, I upped the pace which seemed to splinter the group because I was suddenly on my own in the lead. I wasn't keen on a long, solo 5 mile effort so in a sense felt relieved when Deason came up beside me.
With the course more shaded, we ran stride for stride for the next few kilometres. Knowing he had run the Tiree Half Marathon 4 days earlier and if it came down to a sprint he would have the edge, I tried to keep upping the ante, keeping a half stride or so ahead. We passed halfway in 16:02. Both of us have sub 31 minute 10km times to our name so this shows the intensity of the wind early on. At 6km we came to a hill which lead us over a bridge, down the other side then round a tight left turn towards the train station. Most people with sense will tell you to take hills gradually. I'm not blessed with much sense though so I took a risk, surging up the hill and throwing myself down the other side and round the corner. I'd gained a gap but regular readers (anyone?) will know my golden race rule of never looking behind so I didn't know by how much. I gauged it by measuring the time gap between spectators applauding me, stopping then applauding the next runner. Decent but not big enough that I could relax.
7-8km was another hellish windy stretch. From there it was back towards the coast then a final wind assisted kilometre to the finish. 8km in 25:41. I consciously increased my workrate again, covering the next kilometre in 3:02. I then surmised, provided I ran no slower than Deason in the last kilometre, I'd sealed it. 2:54 for the kilometre brought me to the finish in 31:35, a very pleasing time in trying conditions. Deason finished runner up in 31:57. Gilroy took 3rd in 32:39. 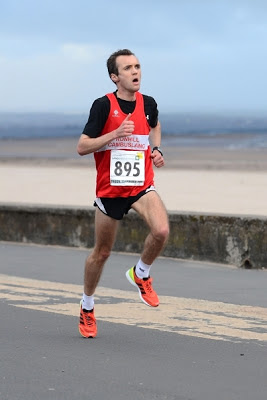 Sadly I sprained my left foot (probably on the corner just after 6km) so was in some discomfort on my warm down jog. I soon forgot about that when my Dad brought me in a fish supper while I waited for the prize giving and caught up on running gossip with various people including Kilmarnock Harriers Scott Martin and Kara Tait. This is the part of the sport I enjoy most. I maybe need to get out there and race more often in races like this, especially if the prizes are anything like the £100 I received.

So a good night's work. I trained the following night but had to call it quits for 3 days thereafter to let my foot heal. A course of deep heat and ice packs has worked so, as I write, I've long since recommenced training normally, continuing to tick along nicely.

As a footnote, thank you to Kerry Wilson for his support and treating my Dad to a chip shop dinner and Kilmarnock Harriers for allowing me use of their tent for my clothing during the race.﻿
Posted by athlete_sg at 22:40