Blast From The Past- Scottish Road Relay Championships 2009

Thanks to my Dad for both photos in this post.
With the Scottish Road Relay Championships pending, I've looked back to the 2009 race when I made my Cambuslang debut. The month before the race, I'd spent 10 days in the Algarve on a training camp, an experience I've unfortunately been unable to repeat since due to a combination of work and other race commitments in March. I was between clubs having run my last race for Calderglen Harriers at the National Cross Country and waiting for my first Cambuslang outing.
For the record, I took 2nd leg (5.8 miles) for the B team and guided the team effortlessly down the field from 10th to 12th. We eventually finished 17th. My time of 31:30 was a course best and a chunk faster than my 32:44 clocking the previous year in a very competitive 11th placed Calderglen team. The Cambuslang A team of John Macnamara, Stephen Wylie, Kerry Wilson, Chris Wilson, Jamie Reid and Robert Gilroy finished 5th. And so a new chapter in my running career began. It's still going. 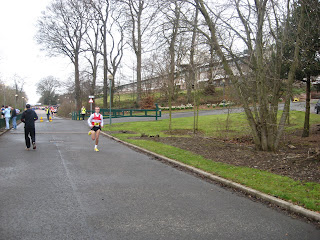 Above: my first few strides in a Cambuslang vest. Above: coming up a slight incline into the home straight.