Photos in this post courtesy of Colin Stephen.
My performance in the UK Cross Challenge Cross Country in Liverpool, and indeed my approach to the race, was very much dictated by the week leading up to it. Work was extremely stressful. I got through the Monday track session of 20 x 300m, all in 50-53 seconds, without any hiccups. However, the following night, work stopped me getting to the club so I went out a 5.5 miler from home. It was a cold night and pretty windy and I felt awful. I started to feel more unwell as the night wore on and, after a sleepless night, was violently sick in the morning. My brother had a stomach bug the previous weekend which I had clearly inherited from him. I struggled through work that day, hardly eating a thing all day, and only had an appetite for a bowl of soup and 2 rolls and sausage for dinner. Needless to say, I skipped my hill session. A working day ending at 7.25pm the next day saw me miss training again so I went out an easy 6 miles on Friday morning for a psychological boost before heading to Liverpool with the club that evening.
On race day, I was fresh as a daisy though with slight heartburn after going to Pizza Hut with the youngsters the night before. A large Americana and a Pepsi is not my usual pre-race meal. I did have a steak in the afternoon though. A walk round the course at Sefton Park showed me it was muddy but without a hill to be seen. I decided to avoid being caught with the fast start, to run my own race and pick people off. To be honest, despite being right as rain, the stomach bug did influence this approach. I brought both long sleeved and short sleeved tops with the intention of choosing between them. It was a rather chilly day so I wore both.
The course veered left after the long, wide opening straight so I positioned myself to the left on the start line. I ignored the cavalry charge and focused on myself. The mud, while thick in places, was no worse than anything I've trained in and there were no hills to worry about. Double boost. It didn't take long before I was picking off people who had gone with the initial charge. I played a little game of clocking the club names I was overtaking. Cambridge Harriers, Border Harriers, Leeds City, Sale Harriers. I finished the first lap of 3 feeling fresh with plenty more places to gain.
﻿ 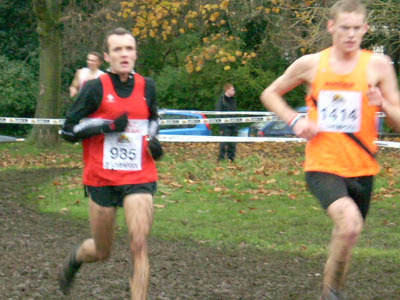 Above: working my way through the field, preparing to overtake another athlete.
The race doubled as the trial for the UK European Cross Country team. Further ahead, the top ranked UK athletes were battling out the 6 automatic places on offer. I meanwhile battled for as high a position I could muster. I remained worried about the bug biting me later on so stuck to the steady, work my way up approach. I knew there were a few Scottish athletes competing but, apart from Mark Pollard, I hadn't seen any during the race. Athletes were becoming harder to overtake but I was still doing it. Work up, run with them, move away, get the next athlete/group.
Ticking off the second and third laps, I finally committed myself...with about 800m to go when I heard the commentary for the leaders finishing.
﻿ 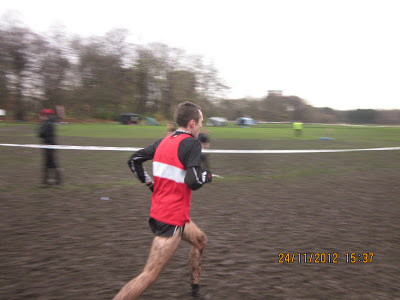 Above: end of final lap before turning into the finishing straight, finally going for it.
The finishing straight was as long as the start, a big dash for home. I hadn't been overtaken by a single athlete and didn't want to be so found a sprint finish I probably shouldn't have had which nearly gained me another place. In the end, I took 70th place from 480 finishers and 32:36 for the 9.8km course, a mere 2:29 and 64 places away from a pre-Christmas trip to Budapest. The following 6 athletes secured the places:-
Jonathan Taylor, 29:55
Andy Vernon, 29:59
Steve Vernon, 30:00
Tom Hunphries, 30:03
Keith Gerrard, 30:04
Frank Tickner, 30:07
The race also incorporated a trial for the European Club Cross Country in February, contested between the winners of the Scottish, English and Welsh National cross countries. With an excellent team performance, Scotland's representatives, Central, triumphed to secure a trip to Spain in February. Over the whole day, 5 Scots qualified for the European event in Budapest, an impressive return.
Personally, I was hard on myself for not being braver. On the other hand, running a minute faster would have lifted me from 70th to 44th. Had I not been ill, who knows? A mere 3 years ago, a race of this type wasn't on my radar. So, not for the first time this year, a sense of perspective.
Once I'd warmed down, we didn't hang around too long and headed up the road with a short stop for dinner. I got home in time to see Take Me Out on ITV and have a beer. All things said, an enjoyable club trip and a good chance to mingle with the youngsters.
Race result
Posted by athlete_sg at 22:13