Once the whisky fuelled prize giving had passed I returned to the cottages to shower and eat. We had by then reached mid afternoon. Time was really your own so folk split up into doing their own things, going to the swimming pool, the beach etc. By this time I had really melted into my surroundings. If you have ever seen the film Local Hero it will give you an indication of the ambience of Bowmore. We had tables booked for dinner at the Lochside Hotel, located a short walk from our accommodation (in saying that, this could be said for all our necessary amenities). We needed to give our dinner orders in advance (there was over 20 of us after all) so I pottered round to do so, visited the book shop and actually purchased a book, called into the beer shop for a selection of Islay beers and chilled out on the beach. At times I can be content in my own company. Islay offered plenty scope for time to myself and to really just reflect and clear my mind of all life's anxieties. They were a world away from me at this point. Since my Gran died in May 2016, home life has been a challenge at times. Work has as well. It has been enjoyable and business certainly is booming but you need off the treadmill every so often or else you burn out. Where better to do that than on an idyllic island? 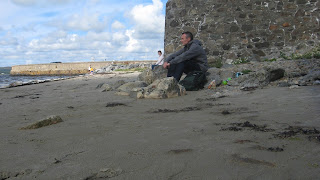 Above: in a reflective mood on Bowmore beach with my shopping from the book and beer shops and Co-Op. I also attempted some stone skimming...unsuccessfully. 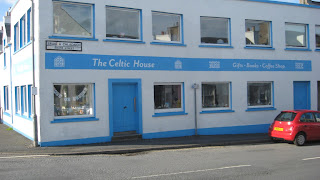 Above: Bowmore's book shop with a cafe upstairs. Very quaint and worth a visit. 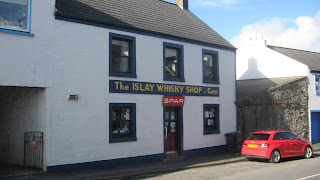 Above: Bowmore's beer shop which received very generous custom from me. 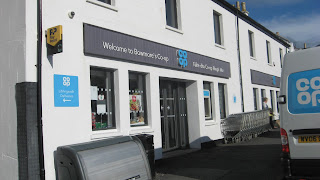 Back in the cottages, I attempted to phone my Dad. Why "attempted" you may ask? Telecommunications in Islay have clearly still to advance to modern day standards since, unless you stand, lie or sit in a particular position in a room, you will not obtain a phone signal. I was lying on my side on top of the bed when, lo and behold, I got a signal. Taking advantage, I stayed in position (leaning to the left on my elbow facing away from the window) and gave my Dad a call to discuss my afternoon. He asked what book I had purchased. The answer was impossible to convey because said book was located on the floor behind me and to turn and retrieve it would have seen the signal disappear and the conversation end. He would have to stay in suspense until Monday night. Such is life! For the record, it was The Secret Library: A Book Lover's Journey Through Curiosities of History. At the time of writing I've still to start it because I'm working my way through Gulliver's Travels.

A beautiful, hearty 3 course dinner, as well as some refreshments, was consumed by all at the Lochside with the backdrop of a glorious sea view. I shared a table with Russell, John McBride, his wife Dot, and Geo Ferguson (Frances' husband). Russell declared to all concerned to be dining at the champion's table. He had fairly been buttering me up since I took possession of that gallon of whisky! At around 9.30pm, a walk round the corner and part of the way up the hill (I did say everything was a short walk) took us to Bowmore Village Hall for the post race ceilidh. Apparently this is the one gig of the year for the band who play on this occasion. They certainly make the most of it because they gave it laldy for the best part of 3 and a half hours. Referring back to Local Hero, without spoiling the film for those who haven't seen it, a ceilidh takes place at one point. This one was an exact replica. I genuinely felt like I was in the film. 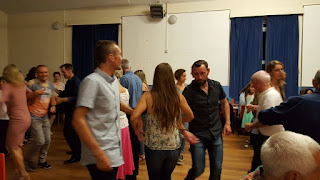 Above: taking the floor for the post race ceilidh where a catalogue of injury and illness problems among the Harriers present miraculously seemed to evaporate. Photo courtesy of Calderglen Harriers. 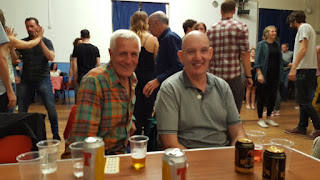 Above: 2 good guys I spent a lot of time with over the weekend. On the left is Gordon McInally's (who drove me from home and back) friend Alex. On the right is Harrier John McBride whose wife Dot mothered me a bit all weekend, making me cups of tea and washing my dishes. Lovely people all 3 of them. In the background, ceilidh chaos ensues. Photo courtesy of Calderglen Harriers.

Having run 19 miles that day (2 miles warm up, a race 13.1 miles long then a 4 miles warm down) I moderated my participation somewhat but did partake in a few of the group dances in between sipping cans of Tennents lager. At around 11pm the band declared they would be taking a short break. They finally did around 45 minutes later (island time, nothing is done in a rush) for a raffle to take place. I hadn't bought any tickets because the prizes included whisky and I had a more than ample supply! I took the chance for a toilet break and also nipped outside the hall for some fresh air and to chance my arm of getting a phone signal. 3 Irish guys were standing outside smoking and immediately recognised me from the race- at least one of them had handed me water at a water station. They are working in some of the local businesses in Islay. We chatted away. While we did so I was clearly standing in a telecommunications hotspot as I received a text message from a friend enquiring about my fortunes that day. For all I know it could have been sent hours before. Once back inside my new chums somehow earned themselves an invite to our barbecue the following night from Eddie. Alas, the raffle had not been kind to the Harriers. In particular poor Russell could be found crying into his whisky at his 11 year losing streak in Islay. In his 11 visits, he has never won either a race or raffle prize. If his allegedly foolproof plan pays off in 2018, that could change.

The band returned to display the extent of their repertoire. Frances jokingly/drunkingly (delete depending on what you think most accurately describes the situation) suggested they play something by Avicii. Remarkably they knew one of his hits and we jigged away to a ceilidh version of Wake Me Up When It's All Over. A few more upbeat numbers followed and I remarkably found, not only had my race aches, pains and jadedness evaporated but I also possessed a remarkable range of dance moves. Confidence or too many beers and lagers? You decide.

Alas all good things come to an end and shortly after 1am the band packed away their instruments until the following year. As we staggered downhill to the cottages, I declared to anyone who would listen that I wanted to stay in Islay and make a life there, doing little bits of business. Someone from Bowmore could perhaps swap and take my place working in Paisley and staying in East Kilbride. We passed by a shop advertising vacancies in the window and Sandy suggested I submit my CV. At that moment, I believed in fate.

Adding to the beauty of the occasion was the night sky. A full moon could be found at the top of the hill. In the other direction, across the horizon over the sea was a red sky. Life felt so perfect and complete. Why can't it always be like this? 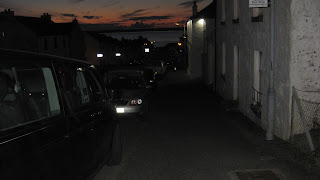 Above: a gorgeous sky to end a wonderful day. Behind me as I took this photo was also a full moon.

Fear not, the tale does not end here. How wild did things become on Sunday and how did it affect the mood on Monday? Find out in the final instalment of this epic adventure, coming soon.