Another week, another race. There are worse habits. With 3 weeks of consistent training and 2 races behind me, I'd trebled both the number of consecutive weeks and my race count in 2016. It's amazing how you get into a positive cycle- training helps you race, racing well motivates you to train and so on.

A shorter trip this week took me to Clydebank for the Clydesdale Harriers 5km Road Race, still referred to by some, including my Dad, as the Dunky Wright. I underestimated the journey time, arriving slighter later than I'd hoped, 40 minutes before the start. Registration however didn't take long and I was warmed up and at the start line in the industrial estate across from the shopping precinct with time to spare.

A healthy turnout from Cambuslang were among what looked like a good calibre field. The route takes in a lap and a half of the industrial estate (1500m approx) before heading out through a residential area, briefly onto a footpath beside the main road then onto the canal path for the final 1800m or so. I found myself in a large pack of 10 fairly zipping along. Approaching 2km it was more or less still together. 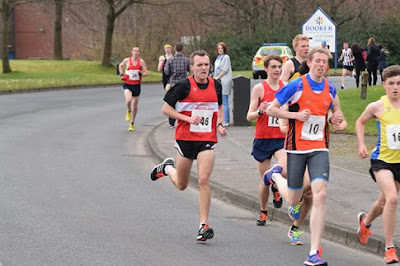 The pace was a step up from what I'm used to in recent months and I was clinging on to the pack. Seeing the company I was keeping though helped keep my head up. Craig Ruddy could be found at the front pushing the pace along. As tends to happen this in turn kept me clear of a large chasing group.

On seeing the 3km mark, I resolved to treat the remaining 2km like one of my mile reps. Encouragingly it would be flatter than the circuit I use for those. As we turned onto the canal, I preserved my golden rule of racing of not looking behind. I didn't need to look to know I was being pursued. While I hadn't overtaken anyone, I also wasn't being caught and in the end no-one did pass me. At the front Craig and a figure unknown to me (James Bowness, a 1:47 800m runner it turns out) had pulled away. A group of 5 followed them then me in a no man's land between that group and those pursuing me. At 1km to go, I told myself "only a 3 minute effort left" and found another gear on seeing "400m to go" painted into the path. I held off clubmate Craig Jardine to take 8th place in a course best of 14:59 and the mini honour of 1st out of the 7 Cambuslang finishers. The top 10 looked like this (copied from the Clydesdale Harriers website):-

In a field of 168 runners, there were many battles throughout and a high standard with 22 athletes breaking 16 minutes, 47 under 17 minutes and the last finisher clocking 24:40. A little mention to my old Calderglen team mate Russell Couper who managed his fastest 5km in some time, 24:04. Anyone can run further but it's harder to run faster. Well done Russell.

While empty handed in terms of prizes, I took great encouragement from my time, my fastest for the distance on the road in over a year. As a club we are also looking good for the upcoming Scottish Road Relays. Our remaining runners were:-

With the sports centre in Clydebank, the Playdrome, closing this year, this may be the last running of the race on this particular route. It should however live on. Clydesdale Harriers certainly intend it to. Seek it out in the calendar. High quality and good value for money, organised by a friendly club.

As a footnote, while it had no bearing on my result, a lamb bhoona and 4 pints of lager is not recommended race preparation. I'll say no more.