Experience over the last few years since making my jump forward in running has told me that I train best when I have targets. When I'm not targeting anything, training goes wayward and, in my Dad's words, I "phone it in." Following the Calderglen Trail Race, I had no immediate races to aim for but did have considerable preparation to do at work before going on holiday at the end of the following week. By the end of June, I had trained at a consistent level for 16 consecutive weeks since returning in mid March from my mini sabbatical with some very pleasing training sessions logged (so I found while reading my training diary at the pool). I had also raced 13 times in that period, enjoying a considerable amount of success along the way. I'll save the details however for my end of year review. My race total for first 6 months of the year (including my DNF at the National Cross Country) stood at 17, far more prolific than I've been for at least a couple of years. I therefore took the week off, focused almost exclusively on my job, including Saturday and Sunday shifts (I left 10 pages of holiday notes) then enjoyed 15 days with my brother in the Costa del Sol. More on that in a future post. Running wise, the most generous thing I could say is I ticked over.
There's a lot to be said about getting fit by racing. My race targets are the Scottish track 5000m at Kilmarnock on 17th August and a BMC track 10,000m in Stretford on 6th September. Any others around those I'm seeing as preparation. The Kilmaurs 5k had caught my attention after I saw Ian Goudie write about it but I'd never been able to attend until this year. Having a week and a bit of proper training behind me and being 12 days removed from the last of my 14 San Miguel fuelled nights, this constituted an appropriate "see where I am" type race.
It nearly however didn't happen for me. I reached Kilmaurs without a hitch then hit a problem. I couldn't find Morton Park, the race venue. After driving round what seemed like every street in the entire village, I gave up the ghost and started heading home before seeing a small arrow which said "5k" out the corner of my eye at the very last second. This lead me up a narrow lane barely wide enough for a pedestrian never mind a car then, eureka, a pitch with a dirt track surrounding it and, most importantly, runners. By my time of arrival, I had only 20 minutes to collect a number, change out my suit (I drove straight from work) and do a warm up of some description.

I lined up for the 7pm start alongside Robert Gilroy and over 150 other runners, an amazing turnout for a midweek race in a rural location during the Commonwealth Games. The first kilometre comprised 2 laps of the dirt track before leaving the park down a flight of stairs into Kilmaurs main street. Robert and I quickly established position and a sense of deja vu from Calderglen Park set in on my part. 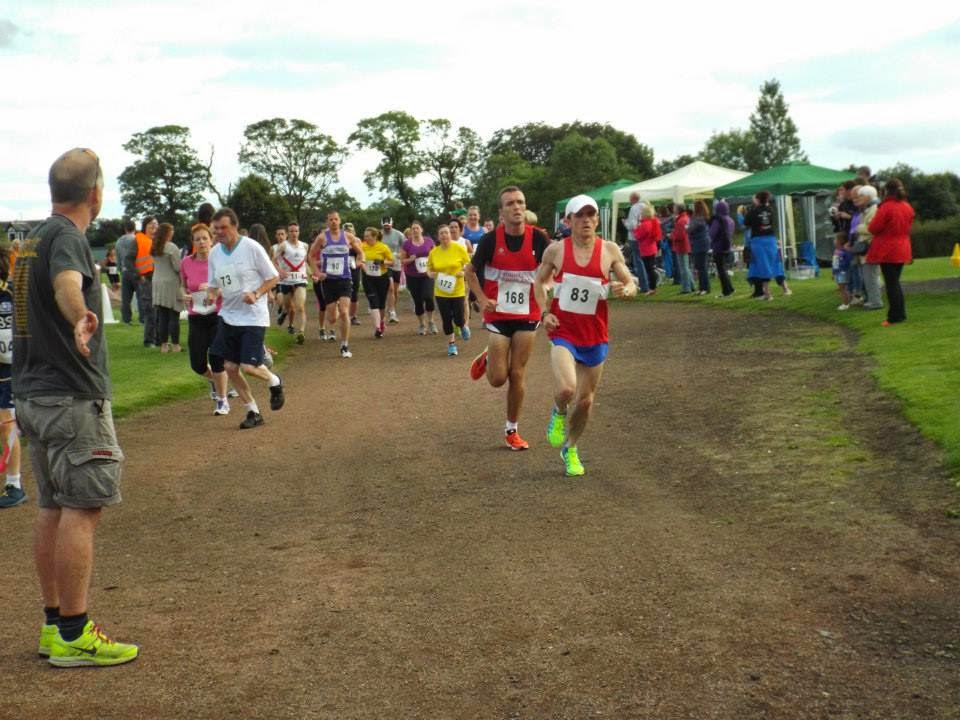 Above: leaving Morton Park after the initial 2 laps. Photo courtesy of Kenny Phillips.
The course then followed an undulating route in the countryside surrounding the village. I was feeling sluggish but kept with Robert until just after 2km. He is full of confidence and rightly so and slowly forged a gap. After 3km, to be honest, I was glad I only had another 2km to go. Eventually, we turned off the roads onto a trail surface heading back to Morton Park. I re-entered the track for a final lap to the finish just as Robert finished. He clocked a swift 15:11 with me following 15:39. The organiser said at the prize giving I was "hot on his heels." I'm not sure that's a totally accurate description. 3rd placed runner Craig Reid (Bellahouston Road Runners) was close to me in turn with his PB finish of 16:11.
The remainder of the Cambuslang contingent comprised George Pettit (7th, 17:08), Chris Upson (8th, 17:13), James Healey (13th, 17:42, a PB) and Eddie Carr (43rd, 20:16). Robert, George and I shared the £20 team prize between us and had the pleasure of photos with the Kilmaurs Gala Queen. In the women's contest, local girl Kara Tait (Kilmarnock Harriers) claimed the win and an excellent 10th place overall in 17:17, fending off Laura Wallace (Ayr Seaforth) and Kilmarnock team mate Lindsay McMahon in the process. For me, the race gave my heart and lungs a jolt and, for that reason, was a worthwhile exercise.
Full results are here.﻿
Posted by athlete_sg at 00:13